In July 2012, an airplane with 208 feet wings extending far longer than normal single carriers flew around Europe for more than 24 hours. By day, it ran using the sun; by night, it still ran by the sun – this time using the power reserved from the sun during the day.

This is by far the longest and highest flight by a piloted solar-powered craft. Altitudes reached 28,000 feet above sea level and an average speed of 26 miles per hour. With 12,000 solar panels installed on Solar Impulse (the plane’s name), it glided across Payerne, Switzerland  to Jura Mountains in France.

Solar airplanes are light, flat and thin and are usually made up of carbon-fiber pipes for the frame. The wings of solar planes play a crucial role in the lifting part. These planes are often shaped like a “V” or an “X” as this orientation prevents the plane from rolling During steady flight, the airflow due to its relative speed creates a force that maintains the airplane in the air – compensating the weight and drag by propellers.

How Solar Panels Are Used 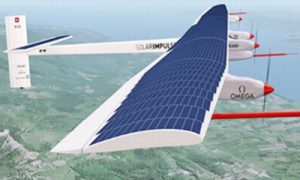 Solar powered air crafts use solar panels to collect solar energy for immediate use,b remaining energy collected for night flight. These are the heart of the planes because they cover a huge stretch of the plane. Not only are they thin (a few millimeters thick), they are also efficient and inexpensive. The solar panels cover the wings, tail and/or fuselage of the plane and convert light or solar energy into electrical energy. This device is called “Maximum Power Point Tracker”, it ensures that the solar panels are working at their maximum efficiency. How much energy is absorbed depends on the sun’s irradiance and the craft’s elevation in the sky. During the night when no power comes from the solar panels, the charged batteries provide power to the plane until the new cycle starts.

Because solar powered air crafts do not depend on the atmosphere for producing power, no harmful exhaust gas are emitted. Solar energy is used to supply power to the propulsion system and onboard instruments. To do this, the aircraft must maintain a fine balance between collecting and consuming energy.

While flying with the help of the sun is not yet ready to replace commercial jet transportation – a few years might all be needed to make this into a reality.